Fanny Price, and presumably Jane Austen, believed, along with most Christians of their day, that all of creation points to God, and that science gives many evidences of God’s existence and character. William Paley, a prominent clergyman and naturalist (scientist), agreed with Fanny that our bodies, as well as our world, are works of God.

Almost all Anglican clergymen, like Edmund Bertram of Mansfield Park, graduated from either Oxford or Cambridge University.  Both universities offered various courses in science which were optional and required extra fees.  By the early 1800s, both universities recommended that all students be familiar with William Paley’s book, Natural Theology; or, Evidences of the Existence and Attributes of the Deity, Collected from the Appearances of Nature. (I love those long titles that tell you exactly what’s in the book: evidences, from nature, that God exists, and what he’s like!) Natural Theology was first published in 1802, when Jane Austen was 27 years old, and it’s still read and discussed today.

Paley (1743-1805) was an Anglican clergyman, a professor at Cambridge, and eventually held a variety of church posts, which supported him financially. Several of his books were standard texts at Oxford and Cambridge. He summarizes them (in the dedication of Natural Theology) as “the evidences of natural religion, the evidences of revealed religion, and an account of the duties that result from both.”

Paley’s first book, Moral and Political Philosophy  (1785) explains moral philosophy, “which teaches men their duty and the reasons of it” (chapter 1). It includes a chapter condemning slavery. Paley supported the American side of the American Revolution as he expected that it would end slavery in the US, though sadly it did not. His second book, Evidences of Christianity, argues for Christianity from the Bible, logic, and history. As Paley’s health declined and he was not able to fulfill many church duties, the bishop of Durham asked him to write a final book, about evidences for Christianity from nature.  Since God reveals himself both in his Word (the Bible) and his works (the world), this book complemented his earlier texts.

Natural Theology: Defending the Faith with Arguments from Nature

The Christian faith was increasingly under attack in England, and Paley’s books gave university students (about half of which would become clergymen) arguments to “defend the faith.” Darwin’s attacks were yet to come, however; he was born seven years after Natural Theology was published.  In his years at Cambridge, Darwin highly admired the book, saying he knew it practically by heart. Obviously, though, when he developed his theory of evolution he chose to interpret the scientific facts differently than Paley did! A modern biologist, Richard Dawkins, wrote a book modeled on Natural Theology but promoting evolution, stating “Biology is the study of complicated things that give the appearance of having been designed for a purpose.” Dawkins evidently believes it is only an “appearance,” while Paley argued that the “complicated things” of nature truly were designed for a purpose, as they appear to be. 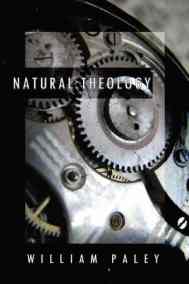 Paley begins his closely-reasoned arguments by assuming he is crossing a heath. He picks up a stone and wonders how it came there; for all he knows it may always have been there. But then he picks up a watch, which is quite different.  The watch is obviously carefully made and designed for a purpose, with all its well-crafted pieces working together in a mechanism to perform that purpose: to show the time.  It is apparent that the watch was designed and made by someone. Even if you have never seen a watch made, or know how one is made; even if the watch sometimes goes wrong; even if you can’t understand what all the parts do and some seem unnecessary; still it is very clear that someone designed and made the watch for a purpose. We would not assume it came together by accident, or by some unthinking laws of nature. If the watch were somehow self-replicating and able to produce further watches, we would be even more impressed by the skill of its designer and maker.  We would not assume that somehow, a million watches ago, it came into existence without anyone making and designing it. However, atheists consider the world in this way: no matter how much nature “seems” to have been designed by some intelligence, they assume it was not.

Paley goes on to compare the human eye with a telescope. Both operate on the same principles, using laws of optics, though the eye is far more complex and versatile than the telescope. Is it likely that the telescope was designed by an intelligence, and the eye happened by accident? There are variations of the eye in other animals; birds whose eyes are designed to see very close up or very far away, fish whose eyes are especially designed to see in the water, the eel whose eye has a special covering to protect it as it burrows through sand and gravel; all obviously designed for the special needs of that creature. Our tiny eyes are designed to take in not only small details, but an immense landscape: “in the hands of the Creator, great and little are nothing.” Even the mechanisms that protect our eyes, the eyebrows and eyelids, are amazing creations.  Our ears are also complex and wonderfully designed, and the ears of other creatures suit their unique lives and needs.

Many other aspects of human and animal biology show design in creation.  Paley describes the mechanical design of our joints, muscles, bones, and digestive system. He gives examples related to animals, insects, and plants, showing how animals are uniquely designed for their specific environments.

God’s Existence and Character, Based on Nature

From these many examples Paley concludes, first of all, that God exists. “Design must have had a designer. That designer must have been a person. That person is GOD.”

What is that designer like? Paley argues that God must be “superlative.” He explains God’s “omnipotence, omniscience, omnipresence, eternity, self-existence, necessary existence, [and] spirituality,” mostly based on the extent of creation, its details, and the fact that whoever created it must be outside the creation itself.  He argues for God’s unity based on the connections between all the parts of the universe, which imply one overall plan.

Next Paley argues for God’s goodness. He shows that what God has designed is intended to benefit His creatures. God has given us and the animals senses that give us pleasure, even though pleasure was totally unnecessary for our survival. God has even designed us with different kinds of pleasure at different stages in our lives. The young are happy enjoying pleasure, while the old are happy when they’re not in pain! (I guess I’m old; in the last few days I had some back pain, and when it stopped for a few hours, I felt very happy!)

Paley shows that even things we think of as “bad,” like poisonous snakes and predators and prey, work for good in the natural world. Of course the poison of snakes is good for the snake himself, though bad for the one who is bitten! And the system of predators and prey keeps the animal population to a reasonable level. He concludes that in spite of many things we can’t understand about God’s work, it is generally good.

I was surprised how apparently up-to-date and detailed most of the science, or “natural history,” in this book is. Paley’s descriptions of the human body and of the bodies and habits of many kinds of living creatures are very detailed. Most of the information came from other clergymen, who were the professors at the universities and the country parsons who observed and collected much information about natural history. (Next week we’ll look at one of those parson-naturalists.)

Chemistry and astronomy were still developing at this time. Paley’s chapter on the chemical elements is about earth, air, wind, and fire, the traditional “elements.” His chapter on astronomy recognizes recent developments including the newly discovered planet Georgius Sidius: that’s the name Herschel originally gave to Uranus. Paley mentions that there may be more planets discovered later. Paxton, who added illustrations and notes to the book a few years later, comments that four “new planets” had recently been discovered—we would now call them asteroids.

Paley’s arguments for God’s existence and character, based on nature, are clear and logical.  They reflect the “Age of Reason” (or Enlightenment) he and Austen lived in. Jane Austen, with her preference for sense rather than sensibility, probably found such arguments quite appealing.

When you look at nature in all its complexity, does it seem more likely to you that it was designed by someone, or do you think that processes such as natural selection are sufficient to explain it all?

Natural Theology by William Paley. You can get this book free online, but after trying several free versions, I recommend this version instead, which is easy to read, formatted well, and includes very few typos. An introduction relates it to the arguments of evolutionists today, who are still trying to counter it.

One thought on “Faith and Science: William Paley and Natural Theology”

Jane Austen transports us to a world of elegance and upheaval. The Church of England, at the heart of her life and her world, is key to understanding her stories. Readers may wonder:

Fashionable Goodness: Christianity in Jane Austen’s England answers these questions and many more. It explores:

Comprehensive, yet affordable and easy to read, Fashionable Goodness will help you see Austen’s beloved novels and characters in richer and deeper ways.

“You will look at Mr. Collins, the Crawfords, the Dashwoods, the Tilneys, the Wickhams, and Willoughbys--and especially Fanny Price!--with new and surprising insights. Bravo to Brenda Cox for giving us this very accessible, illuminating take on the ‘fashionable goodness’ of Austen’s era!” ~ Deborah Barnum, Jane Austen in Vermont

“This scholarly, detailed work is a triumph. Easily read, helpful and accurate, it provides a fascinating panorama of 18th century Anglicanism and the various challenges the Church and wider society faced. Cox’s many insights will enrich readers’ understanding and appreciation of Jane Austen’s novels and her life as a devout Christian.” ~ The Revd. Canon Michael Kenning, vice-chairman of the Jane Austen Society (U. K.) and former rector of Steventon