Catherine Morland was delighted that Northanger was an abbey, “and she was to be its inhabitant. Its long, damp passages, its narrow cells and ruined chapel, were to be within her daily reach, and she could not entirely subdue the hope of some traditional legends, some awful memorials of an injured and ill-fated nun*.” –Northanger Abbey

Roger E. Moore, in Jane Austen and the Reformation: Remembering the Sacred Landscape,  explores the history of the abbeys and Jane Austen’s thoughts about them and references to them. He believes that while Austen was not a Catholic, she regretted the destruction of the monasteries, convents, and abbeys of England. Several of Austen’s books include subtle contrasts between the pre-Reformation world and Austen’s own time. 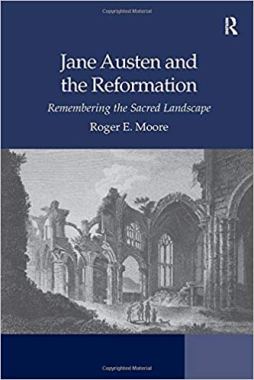 The book is full of fascinating insights and information. Here are some highlights:

The Dissolution of the Monasteries

Moore begins with the Dissolution of the Monasteries.  King Henry VIII broke from the Catholic Church in the 1500s and started the Church of England.  There were hundreds of Catholic monasteries all over England. They were “centers of contemplation and devotion, as well as purveyors of hospitality and charity” (Moore, p. 2).  They ran hospitals, schools, and almshouses to provide for the destitute.

However, King Henry coveted their rich properties and feared their allegiance to the Pope.  Between 1535 and 1540, his agents shut them all down, along with the charitable institutions they ran. The Crown took over their lands and furnishings. Many of the buildings were destroyed. Some became churches or cathedrals, and others were rebuilt as the homes of wealthy families.

In the first two chapters of Jane Austen and the Reformation, Moore traces the controversies surrounding the Dissolution. Many Protestants believed it was right to destroy the monasteries. They thought that the monks, nuns, and priests taught false doctrine and practiced blasphemous rites. A minority of the English people, though, lamented the loss of the monasteries.  They looked at the abbeys (large monasteries and convents) as places of hospitality, charity, and learning. Some considered the monasteries’ destruction to be sacreligious, bringing a curse on those who took over the buildings and lands.

By Jane Austen’s time, there was a sense of nostalgia, looking back at the time of the monasteries as a better, brighter era than Austen’s England was (3). The French Revolution, with its destruction of monasteries in France, reminded the English of the destruction of their own monasteries.  Catholics had very limited civil rights in England, but in the late 1700s there were very controversial movements to restore some of their rights (we’ll look at that more in my next post). So Catholic religion and history were current issues.

Moore explains that Austen was familiar with these views and controversies. When Austen was about 15 or 16 years old, she wrote a satirical “History of England.” She says of King Henry VIII:

“The Crimes and Cruelties of this Prince, were too numerous to be mentioned, (as this history I trust has fully shown;) and nothing can be said in his vindication, but that his abolishing Religious Houses and leaving them to the ruinous depredations of time has been of infinite use to the landscape of England in general, which probably was a principal motive for his doing it, since otherwise why should a Man who was of no Religion himself be at so much trouble to abolish one which had for ages been established in the Kingdom.”

Austen obviously did not actually believe that Henry VIII destroyed the monasteries in order to create picturesque views in the English landscape! But Moore argues that this passage does show Jane Austen’s sympathy with the monasteries. Austen comments that their destruction was not truly for religious reasons, but for Henry’s personal reasons (43).

In chapter 3, we find that Austen was familiar with many institutions that had formerly been monasteries. Moore tells us in the introduction, “As a young girl, she attended Mrs. Latournelle’s school in the ruins of Reading Abbey; she visited relatives at Warwickshire’s Stoneleigh Abbey and White Friars in Canterbury, she took excursions to Netley Abbey in Hampshire; she loved Winchester Cathedral, which for much of its history had been a monastic foundation. These places obviously inspired her, as references to medieval abbeys and churches figure prominently in her works” (3).

Chapter 4 is about “Austen’s Sacrilege Narrative,” Northanger Abbey. Moore claims that Northanger Abbey is a nostalgic look at the monasteries of England, and something of a protest against their becoming private estates rather than centers of worship and service to the community.

Catherine Morland expected that parts of Northanger would be in ruins. Austen was familiar with a ruined abbey, Netley Abbey near Southampton. She mentioned Netley in several letters. Netley Abbey had been taken over by a wealthy family and made into a private house which was in ruins by Austen’s time. Various 18th century poets wrote about this abbey, lamenting its destruction as a holy place, a place of prayer (79-84). Sacrilege narratives told stories of curses and punishment on families that had taken over abbeys.

In a tale worthy of Halloween, it was said that in 1700 a carpenter named Walter Taylor was hired to pull down the remains of the Netley Abbey church.  A monk warned him in a dream not to desecrate the abbey further. Taylor ignored the dream. As he was using his pickax to remove some stones, a large window fell on top of him “and crushed him in pieces.” In later elaborations, the walls themselves conspired to crush the “poor Wretch,” and ghostly monks surrounded him, shouting at “the destroyer of the holy cell” (Moore 82). Jane Austen would have heard this story from guides at the ruins, or read it in the guidebook sold at the abbey.

Themes of hospitality and lack of hospitality run through Austen’s books. The monasteries were known for their charity and hospitality. They offered all travelers a place to stay.  In contrast, General Tilney only accepts Catherine because he thinks she is rich, then casts her out when he finds out she’s not. Austen is showing that the wealthy families owning abbeys were not as hospitable and open as the monks and nuns had been (93-94).

Catherine’s fate, in being ejected from Northanger Abbey, may even parallel the fate of the “ill-fated nun” she hoped to hear about.  When the convents were dissolved, the nuns were all cast out and many had nowhere to go; thus they were all “injured and ill-fated” (94).

Northanger Abbey also fails in serving the community, as the monasteries did. The whole abbey is now focused on meeting General Tilney’s needs and desires, including “a village of hothouses” and “a whole parish at work” in his gardens (89). The community is ignored. The General even says that Henry Tilney’s church living is for his son’s benefit; he does not consider it to be for the community’s benefit (92).

In contrast, Donwell Abbey, of Emma, is “done well,” Moore says.  Mr. Knightley is “a true knight who recognizes and fulfills his responsibilities” to the whole community (106).

Much of Northanger Abbey is set in Bath. However, Bath Abbey, the most obvious landmark in the city, is never mentioned. Dr. Moore believes Austen purposely left it out as a criticism of Bath society. Bath had become a center for entertainment rather than a spiritual center (97-104).

Chapter 5 is entitled, “Stripping the Altars: Mansfield Park and the Erosion of the Sacred Landscape.”  Mansfield Park has the most obvious religious themes of any of Austen’s novels. Moore expands on its references to abbeys.

Fanny Price and the Bertrams visit the Rushworth’s estate, Sotherton.  Sotherton’s family chapel appears to be based on the real chapel at Stoneleigh Abbey. Stoneleigh belonged to Jane Austen’s mother’s cousin, Rev. Thomas Leigh. Austen visited there in 1806. It had been a Cistercian monastery, though only the old gatehouse remains of the monastery.

The Sotherton chapel, like the Stoneleigh chapel, is simple and unadorned. Fanny longs for aisles, arches, inscriptions and banners, which Edmund tells her were found in the “old chapels of castles and monasteries.” Fanny also laments the loss of regular family worship, morning and evening, in the chapel. This again is reminiscent of the monks who worshipped together at regular times throughout the day and night (114-115, 119-120). Austen is expressing nostalgia for the days of the monasteries.

The Bertram family takes in Fanny Price, but they do not treat her with true hospitality. Mrs. Norris and the Bertram sisters particularly look down on her. Moore contrasts their lack of hospitality with the history of the Royal Garrison Chapel, where the Price family worships in Portsmouth. This building had been a monastic hospital, where all were welcome. Daily worship was an essential part of the care offered there, where the hospital treated spiritual needs as much as physical needs. At Mansfield Park, on the other hand, Mrs. Norris can’t even bring herself to send a prayer book to her goddaughter; she has no interest in anyone’s spiritual needs (124-125).

Mansfield Park also mentions another abbey. Fanny has a transparency of Tintern Abbey in her sitting room. Tintern Abbey, in Wales, fell into ruins after Dissolution. William Wordsworth wrote a famous poem about it in 1798, “Lines Composed a Few Miles above Tintern Abbey.”

The final chapter explores Austen’s unfinished novel Sanditon. The seaside resort of Sanditon is described as a place of “pilgrimage.” But at Sanditon, only the present matters, not history and not faith. The goal of Sanditon is to make money from those who come.

Jane Austen and the Reformation expands much more on these topics and many others. The first two background chapters may contain more detail than non-academic readers are looking for. However, chapters 3-6 are full of fascinating ideas about Austen’s life and novels. Unfortunately the price, as one often finds with academic books, is hefty, though a new paperback version and a Kindle option make it more affordable now.  You might also find the book through college libraries.

Full of rich information and valuable insights, I highly recommend this book to those who want to get deeper into religious issues that influenced Jane Austen.

Spooky tales were told of the abbeys, where ghosts took revenge for the injustice of the monks and nuns being cast out of their homes. Halloween is a time when people tell spooky tales for fun. But originally it was All Hallows’ Eve, the night before All Saints’ Day when the lives of those who lived and died for Christ were remembered and celebrated.  What person of faith can you remember and imitate in some way during this season?

3 thoughts on “Jane Austen and the Reformation by Roger E. Moore: Review and Highlights”