“A lively imagination soon settled it all.”—from Pride and Prejudice Many lively imaginations have been applied to Jane Austen’s novels. We all wish Austen had written more, and the writers of “Austen variations” give us more novels to enjoy. Some of my favorite imaginative variations, reviewed this week and next week, include clearly Christian themes and messages. While Austen’s books were written from a strongly Christian worldview, she rarely spoke openly about religion in her novels, believing that such discussions were not appropriate for novels. Her books, though, do have strong faith messages, which these variations expand. Today I want to tell you about two Christian Austen series I love: Maria Grace’s “Given Good Principles,” and Robin Helm’s “Yours by Design.” Both are based on Pride and Prejudice (like the vast majority of Austen variations).  Next week we’ll look at some individual novels. None are heavy-handed or preachy; all incorporate faith in a natural and realistic way. All are well-written. All vary enough from the original plot to be interesting and compelling, but retain some of the familiar beloved themes, characters, and phrases of Austen’s novels. 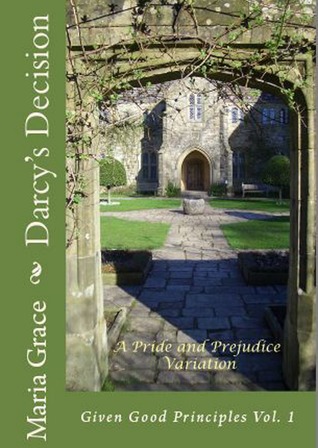 This entertaining series includes Darcy’s Decision, The Future Mrs. Darcy, All the Appearance of Goodness, and Twelfth Night at Longbourn. The first three books take Darcy and Elizabeth through various trials. Godly clergymen encourage them, and they grow by applying Christian principles.  The fourth book focuses on Kitty, who faces her own trials, and has less overtly spiritual content. Characters occasionally (not in large doses) pray and discuss Scripture and spiritual issues. I appreciate, as always, Maria Grace’s scenes illuminating contemporary culture, ranging from “mumpers” on St. Thomas’ Day (poor old women bringing blessings and receiving food) to the extensive responsibilities of the lady of a manor (which Caroline Bingley definitely does not want to take on!). The stories also force Wickham, Caroline, and Lydia to take the consequences of their actions, which is quite satisfying to the reader.  And, we get to enjoy Mary and Kitty’s individual and precious personalities.

From Given Good Principles:

The curate Mr. Pierce reads from Proverbs 31 to his church, then challenges his society’s value for a wealthy spouse rather than a godly one: “How confused our priorities.” Mr. Pierce’s brow furrowed. “It seems the way of men now is to search for a woman worth more than rubies. Later, he hopes she is of noble character” (The Future Mrs. Darcy, chapter 6). Mrs. Gardiner advises Elizabeth in looking for a good husband, saying “a man’s words may lie, but the fruits of a man’s life will always speak the truth of him.” How to see those fruits? She advises Elizabeth to observe: “What are his relationships like? Will any speak in his defense? Do those who know him respect him? Is he a man of his word? Is he prudent with his money? Generous to those in need? Does he call attention to his virtues, or is he clothed in humility? Does he demand his own way? Is he rude and self-seeking?” (All the Appearance of Goodness, chapter 9) Great things to consider in finding a spouse!

Yours By Design, series by Robin Helm

This delightful series includes Accidentally Yours, Sincerely Yours, and Forever Yours. We all know that Darcy changed completely between his first proposal to Elizabeth and his second proposal.  What if . . . he actually was a different person?  What if a modern-day Christian Will Darcy, who was looking for his own Elizabeth Bennet, was switched with Fitzwilliam Darcy after the first proposal? This fun series shows the results. Each book will compel you to read the next, as they all make up one story, nicely resolved in the end. I loved seeing the original Darcy watch the Colin Firth Pride and Prejudice mini-series and comment on all that happened. He is shocked by the wet shirt scene! 🙂  Also there’s a lot of history worked into this series; Will Darcy is a history major who has unknowingly been prepared for the switch. He uses his knowledge of history to help the Darcy and Bennet families, struggling inventors, and those like Wilberforce who are working for transformation in society.  The Gardiners and their friends attend John Wesley’s church in London and hear Wilberforce speak, which is also a delight. I would like to have seen a little more of both Darcys’ spiritual journeys, but what we do see is good. The last book is heavier, dealing more with Wickham’s depredations, and, in the modern story (which alternates with the earlier story), there are mentions of rape (this is first discussed in book 2) and sex trafficking. Wickham has to take the consequences of his actions.

Highlights from Yours By Design book 2, Accidentally Yours:

Each chapter starts with a great quote.  Here’s one of my favorites: “A man should never be ashamed to own he has been in the wrong, which is but saying that he is wiser today than he was yesterday.” –Alexander Pope (an author Austen mentioned repeatedly) Will Darcy’s housekeeper gives Fitzwilliam Darcy (and us) a deeper perspective on the pompous clergyman Mr. Collins, who she calls “harmful”: “Mr. Collins was a pastor, charged with the spiritual well-being of his flock. Instead of preaching the gospel and ministering to his people, he lived his life with the express purpose of impressing Lady Catherine de Bourgh. He had the opportunity to lead those people to a closer relationship with God, and instead, he made himself the butt of jokes . . . I doubt that he ever led anyone to Christ during the entire life of his ministry. To see such an opportunity wasted is sad beyond words,” she answered soberly. Expectations for pastors in Austen’s Anglican Church were somewhat different from today’s expectations.  Jane Austen caricatured bad pastors, like Mr. Collins, making us laugh. But it’s easy to forget that they represented real challenges to Austen’s church, with serious consequences.  She also respectfully showed good pastors (or aspiring pastors) like Edmund Bertram.  Looking at today’s church, what are some good qualities of pastors you know or have seen?  Are there any widespread flaws, which perhaps we take for granted but which are harmful to the church nevertheless? Please tell me about other Christian Austen variations or Christian Regency novels that you have read and enjoyed! I’d love to read them and review them. I’m also looking for novels that refer to science of Austen’s day. Next week we’ll review more Christian Austen variations. To learn more about the clergy and church in Austen’s England, try this quiz or other faith-related posts on this site!

Jane Austen transports us to a world of elegance and upheaval. The Church of England, at the heart of her life and her world, is key to understanding her stories. Readers may wonder:

Fashionable Goodness: Christianity in Jane Austen’s England answers these questions and many more. It explores:

Comprehensive, yet affordable and easy to read, Fashionable Goodness will help you see Austen’s beloved novels and characters in richer and deeper ways.

“You will look at Mr. Collins, the Crawfords, the Dashwoods, the Tilneys, the Wickhams, and Willoughbys--and especially Fanny Price!--with new and surprising insights. Bravo to Brenda Cox for giving us this very accessible, illuminating take on the ‘fashionable goodness’ of Austen’s era!” ~ Deborah Barnum, Jane Austen in Vermont

“This scholarly, detailed work is a triumph. Easily read, helpful and accurate, it provides a fascinating panorama of 18th century Anglicanism and the various challenges the Church and wider society faced. Cox’s many insights will enrich readers’ understanding and appreciation of Jane Austen’s novels and her life as a devout Christian.” ~ The Revd. Canon Michael Kenning, vice-chairman of the Jane Austen Society (U. K.) and former rector of Steventon